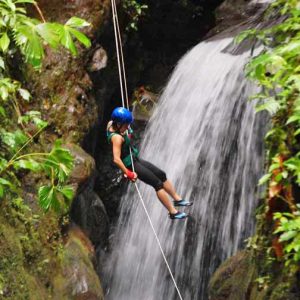 Not only planes, trains and automobiles. We’re scaling rock walls, climbing mountains, biking backroads, zip lining, diving deep and getting up close and personal with nature. See the world from a whole new angle.

California has one of the prettiest coast lines in the world. From Los Angeles heading north, join JauntTV on a road trip that includes Santa Barbara, Paso Robles, Big Sur, Monterey, Carmel, and some Redwood trees.

New Zealand’s historic Kaimai Mamaku Conservation Park is a historic mining site outside the city of Auckland New Zealand, near Paeroa with several popular hiking trails amongst its 174 square miles. Discover the structural remains of the 1885 Woodstock Goldmining Company while enjoying the nature surrounding the railway and the river.
https://www.youtube.com/watch?v=nUH2U3oMnbE

While visiting Bangkok, JauntTV took a detour a world away from the hustle and bustle of the city on a bike riding excursion. We cycled off the beaten path on quiet back roads through paths, narrow alleys and walkways amongst canals and small villages and explored the lesser known places. A true experience.

There are many excursions to pick from as a way to see the landmarks of Los Cabos, but the :45-minute Glass Bottom Boat Tour from Playa El Médano next to Pueblo Bonito’s Los Cabos is Cabo’s main beach where guests can experience Cabo above and below the water has been my favorite landmark excursion to date.

The majestic elephants at Chang Chill, a observational-only sanctuary in Chiang Mai

Chiang Mai, in the striking mountainous area of Northern Thailand, is known for some of the best elephant experiences in Thailand. Chang Chill is a special place, an observational–only environment where visitors observe the six resident females in their natural habitat over the course of their normal day. http://changchill.com/

San Diego from the Water

JauntTV ventured to downtown San Diego for a stay at a new hotspot, the InterContinental San Diego that sits in front of the scenic San Diego Bay waterfront, where we got to explore the area on a harbor tour, with a fabulous perspective of the San Diego-Coronado Bridge and all the ships of the San Diego Naval Base.

Quintana Roo is a Mexican state on the Yucatán Peninsula, surrounded by Cancún, Tulum, Playa del Carmen and Isla Mujeres. JauntTV had a stay at the Grand Moon Palace with adventures at Rio Secreto’s underground river, a Jungle night with zip-lining, cenote swim and ATV’ing, a whale shark adventure and a look at some Mayan Ruins.

Virginia Beach exceeded JauntTV’s expectations in every way with fun activities, an extensive food and art scene and the fabulous Cavalier Hotel.
https://www.youtube.com/watch?v=P9IJaTMJ0v4&t=4s

Wimbledon, is the oldest tennis tournament in the world, widely regarded as the most prestigious has been held at the All England Club in Wimbledon, London, since 1877. Join JauntTV for a bucket list experience.

Tourists are coming back in droves to Acapulco for the beaches, adventures (such as an over-water zip line), cultural museums, resorts, and a nature preserve.

Munich is Bavaria’s capital, known for its annual Oktoberfest celebration, beer halls, centuries-old buildings and numerous museums. JauntTV got to experience all that and a few more – riding a BMWi8, zip lining the Olympic Stadium and watching surfing the middle of the city.

Join JauntTV as we swim with Whale sharks 20 miles off the coast of Quintana Roo, Mexico on a bucket list adventure.

The Beautiful Animals of South Africa

JauntTV takes us on a nature and adventure journey near the Arenal Volcano to the Tabacon Thermal Resort and Spa.

Chicago by Sea and Air

Chicago is one of the most dynamic cities in the United States and known for its bold architecture. Join JauntTV by sea and air to view the city with us.

Cruising Over Cabo on an ATV

A fun snippet of our ATV ride on a suspension bridge in Cabo.

A little local culture, a little ziplining, a little wildlife and a little nap at a private beach.

JauntTV vignette on Falconry at the Ashford Castle in Mayo County Ireland.