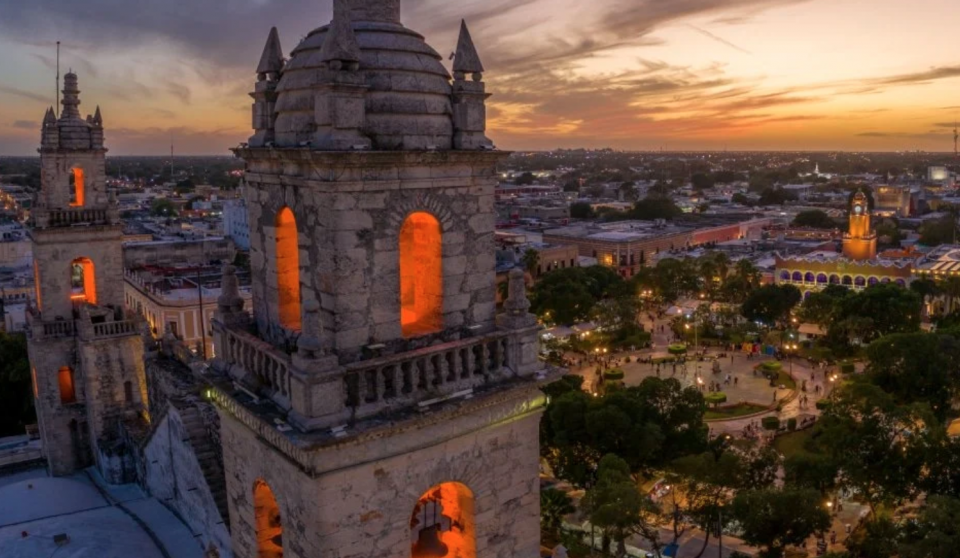 Everyone knows the Yucatán Peninsula for the famed beaches of Cancún and Playa del Carmen, and many are familiar with stunning images of the 2,400 known cenotes (underground pools) that were central to the Maya culture, but far fewer are aware that this region is home to three Mexican states offering more than margarita-fueled resort vacations. Foodies looking for access to Yucatán culinary culture and tradition should skip the tourist-packed beaches of Quintana Roo, the most visited state and home to Cancún, and head instead to Mérida, capital of the actual state of Yucatán in the northwest corner of the peninsula. Despite a rich colonial history that left behind romantic architecture and a strong European influence, Mérida’s population remains 60% Maya, making it the most indigenous major city in all of Mexico and offering a rare opportunity for serious immersion in a cuisine not widely found throughout the rest of the country, and rarely represented at resorts.

Diving into the colorful markets of Mérida is a treat for any traveler but even the most devoted foodies will encounter ingredients that leave them baffled. It’s well worth hiring a market tour guide to point out the most unique items, dig up great samples, inform purchase decisions and, in the case of Adventures Mexico, gather a list of ingredients and bring hungry shoppers to a local house for a hands-on cooking experience of traditional dishes. To get a head start on your own Yucatán culinary education, get to know these 10 classic dishes, ingredients and techniques before heading to Mérida to taste real Mexico for the first time.

Papadzules is an all-day staple of Yucatán menus. At its most basic, it’s chopped hard-boiled egg (like egg salad without the mayo) inside a corn tortilla slathered in pumpkin seed sauce and topped with a tomato chili salsa. Get to know this pumpkin seed sauce; it’s everywhere in the Maya cuisine found in Mérida and throughout Yucatán, as is the similar pumpkin seed dip (sikil p’ak) accompanying many snacks and meals.

Marquesitas street snacks are original to Mérida and stem from the city’s colonial past, when the Marquis’s daughters fell in love them, giving rise to the name they maintain today, at least according to accepted lore. A marquesita is a thin crepe stuffed with just about anything, but the most traditional is the cheese and caramel marquesita. You’ll find them everywhere.

There’s considerable Middle Eastern influence in today’s Yucatán cuisine thanks in some part to the influence of 18th-century Spaniards bringing North African ingredients and, in much larger part, to Lebanese migration in the 19th and 20th centuries. Similar in style to falafel, Kibbeh are essentially bulgar balls stuffed with spiced minced meat and either fried or baked. In Middle Eastern tradition, they’re typically an appetizer to a full meal, but in the Yucatán they’re more of social snack shared by friends getting together for a drink and a chat, or even just a great street bite.

Everyone knows chicken tortilla soup, and Sopa de Lima is similar, but with a twist (of lime). The region’s uniquely potent limes are the star of this simple dish, giving the hot soup a refreshing flavor and strong popularity that would be otherwise surprising in such a sun-drenched state.

Another holdover from Mérida’s colonial history, you may recognize this from areas of the Caribbean settled by the Dutch. Meaning “stuffed cheese,” Queso Relleno is exactly that—a Dutch cheese stuffed with beef, raisins, spices and any other small bit the chef may want to add, like peas or onions, before being steamed in banana leaves in the most traditional preparation. It’s not a light bite.

Made from charred black chilis and a slew of delicious spices, this is a sauce that gives many regional foods their distinctive flavors. You’ll find the paste sold in bricks everywhere and you should pick some up from a market vendor for an easy souvenir and a foolproof way to add Yucatán flavor to your home cooking. When dining out in Mérida, look for Pavo Relleno Negro for a quintessential Yucatán dish of turkey that features this sauce.

Distinctly Yucatán, Xtabentún is a traditional rum liqueur made with fermented honey and anise seed. The name comes from the Mayan word for the particular flowers pollinated by the bees producing the honey for this sweet sip, and it’s usually served chilled and straight.

If you’ve enjoyed cochinita pibil, you’ve already benefitted from this style of cooking that can be applied to just about any meat. Pibil is a Mayan word that describes meat (usually mixed with spices and wrapped in banana leaf) cooked for long periods in an underground pit. Today cochinita pibil (pork) is usually prepared with meat that’s been marinated in strong citrus, but truly traditional cochinita pibil is made from whole-roasted pig.

Watch out for this one. Chaya looks like a beautiful, leafy vegetable similar to spinach can become a nightmare in multiple ways if you’re not careful; otherwise, it’s a Yucatán chef’s best friend, used prolifically in Maya cuisine from chayitas (corn cakes made with the plant) to juices. How can they hurt? Consuming more than 5 raw chaya leaves can result in death, and even handling certain varieties with bare skin can lead to nasty rashes from stinging hairs on the plant.

Another gift from the Maya, Salbutes are perfect after-drinking snacks of deep-fried tortilla topped with shredded chicken or turkey, lettuce, avocado, lime and pickled red onion. Look for them at a fast food joints, street stalls or any backyard gathering where friends are sharing stories and laughs.